THE PIPER OF TREENABONTRY, BOHOLA PARISH.

This poem, requested by Joe Byrne of Midwest Radio, attempts to outline the journey of the unique piper, Joe Shannon who emigrated to Chicago in 1929 and who died in 2004. As a little girl, my mother, Úna McDongh (Harrington) and Joe’s first cousin, lived in Treenabontry with the Shannon family for a number of years before the Shannon family emigrated.

They took their tunes with them

but the music refused to budge.

In Treenabontry I can taste

and smell the wind on

the path the fairies crafted

when they chopped a corner

off Brennan’s house – it had

stood on the track they’d worn

to a frazzle when transporting

the music and memory of the

Before they’d left, melody was

tangled about the house or

it hung carelessly on hawthorn

in moonlit splashes and

Only those little people have

the language to tell us where

a musical note comes from – how

it lodges in the land,

in the heart of a departed family,

in a memory of a house.

in Chicago. This was real – big

or in the smiles it cloaked

and covered up. It was the stuff

happiness and tears – together.

The spirits of skinny streams

and tossing air knew this.

They held on to mossy paths,

forts where they stashed tunes

for home fires in strange places.

And when the new generation

learned a different way of talking,

old language lived on in melody.

I can see the thatched cottage,

wordless at first light. A mother

whispers to God at the cart-shed door.

falls on a bucket of hot coals

handed to a neighbour to preserve

the hope-giving fire for their return.

I see the loaded cart getting smaller

with every step of the old horse, Doll.

My mother stands weeping as her

cousins disappear into myth and legend.

America robbing a townland of a widow,

Ellen Shannon and her young sons.

Only music dug in its heels and refused

to budge. It cut holes in hedges,

buried itself in watery rocks, wakes,

Joe had the gift in the rough and tumble

of birds in the back garden

of being finally alone – came to him

when Patrick Hennelly – piper and

pipe maker from Mayo gave him

his gift of pipes. There were drones

to be mastered, children to be fed.

His arms would have been

Even Odysseus in times of myth

must have cried out in frustration:

what are the kids up to, now, Penelope?

I can hear nothing in this light.

Joe tuned into the piping of

a mother building hope into

a prayer for a special intention.

John McFadden, the fiddler from Newport

composed The Pleasures of Hope

handed him a set of Taylor Pipes

in the sixties. They unlocked squeals

of delight in Joe. He didn’t ask who

he could play with. He just did.

his spirits. Defiant as robins in frost

they battered aside new waves

in their euphoria of reels and jigs.

They heard the far-off cuckoo

and the corncrake in the long meadow

in their country of home-from-home.

Music had found its mark. Pilgrims

descended on his kitchen. Joe

over cups of tea – word was out.

and Liz Carroll, the fiddler

threw their hats into the ring – Joe

gave them hope on nothing stronger than tea.

The Chieftains came and laid out a carpet,

They played with the big man and

acknowledged the duine uasal in him.

with awards and garlands – quiet as

his mother Ellen, he took it in his stride.

with birds in his back garden. They

responded. He took a pair of

Cardinal birds into his home and

refused to bury them when they died.

They came to light in his basement.

left as a boy

the call to life

The ghost in his pipes says it all. 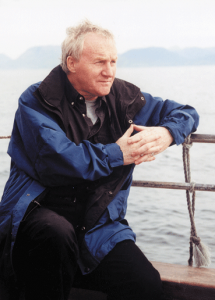 A writer begins ‘where all the ladders start’ even if he doesn’t know where he is going or what this journey is going to ask of him. It is an exciting, exacting journey, real and symbolic where the artist moves freely between the conscious world of daily grind and the semi-conscious, veiled world of the imagination. In special moments the veil is lifted and the two worlds become one. END_OF_DOCUMENT_TOKEN_TO_BE_REPLACED
0
Web Design BangladeshWeb Design BangladeshMymensingh