Terry McDonagh – A Journey in Words

I must lie down where all the ladders start  in the foul rag-and-bone shop of the heart. W.B Yeats

A writer begins ‘where all the ladders start’ even if he doesn’t know where he is going or what this journey is going to ask of him. It is an exciting, exacting journey, real and symbolic where the artist moves freely between the conscious world of daily grind and the semi-conscious, veiled world of the imagination. In special moments the veil is lifted and the two worlds become one. 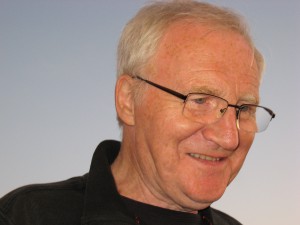 But writing can be a chore – hard work – an endless maze of rejection slips and glimmers of hope: a poem gets published and all is forgiven; a book comes out and there’s joy and hosanna all along the imaginary high streets.

Terry McDonagh’s literary life began to find expression in Hamburg in the early nineties when he came into contact with Olaf Hille Verlag. Prior to that it was a patchwork of unfinished and occasionally published poems.

The Road Out (1993) was published by Olaf Hille and it resonated beautifully around the ‘scene’ in Hamburg.

Prior to that a play: I wanted to Bring You Flowers/ ich kann das Alles Erklaeren was published by Fischer Verlag (Aachen) in 1991. The author remembers seeing the book in a bookshop in Hamburg and his young son, Sean, trying to attract the attention of the all customers to the existence of the book. This son is now grown up and is a very successful actor. A literary life grows up by hook or by crook.

Olaf Hille Verlag became Blaupause Books and A World Without Stone was published in 1998. One thing leads to another it would seem. Ireland Literature Exchange funded the translation of a book of poetry into German, Kiltimagh, in 2001. Mirko Bonne was the translator.

Ernst Klett Verlag, Stuttgart brought out One Summer in Ireland in 2002 and that is still doing the rounds in German schools.

Terry McDonagh took a break from teaching drama in 2001 to take up a post as artist in residence in Melbourne (thanks to Joachim Matschoss) and that wonderful experience resulted in a poetry collection: A Song for Joanna (Hamburg, Melbourne, A Journal in Verse (Blaupause books, 2002).

Joanna and Terry have a son – who is a great little reader – Matthew.